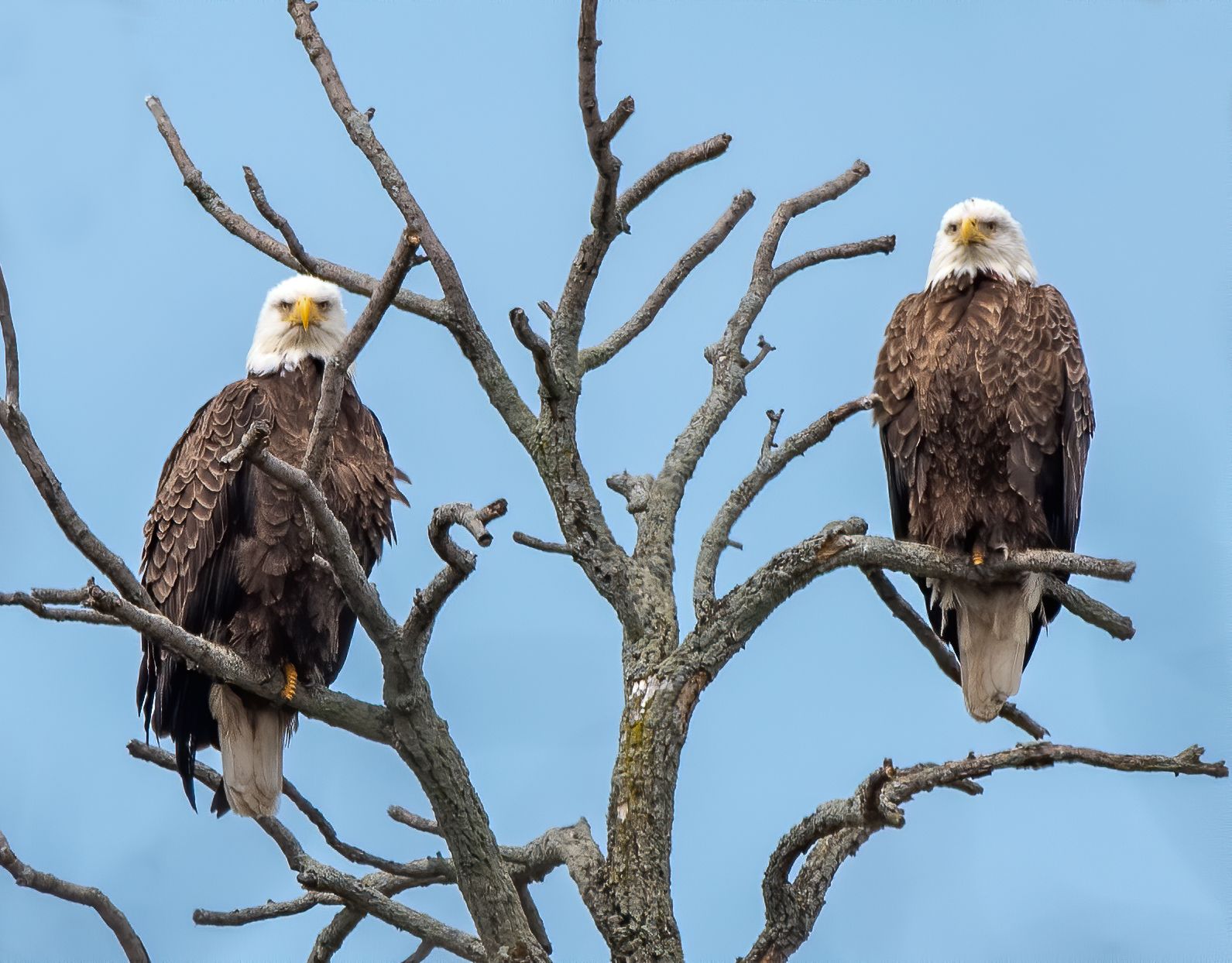 Jackson & Kindness have been a pair since the late spring of 2020. They became a pair after Kindness, unfortunately, lost her mate Justice, when he was forced from the territory.

Both Justice and Kindness had been nesting in a local baseball park, called Bruce Yee, since the fall of 2016. Because the nest was visible from the parking lot it became a big attraction for the community, especially photographers.

In the spring of 2020, while Justice & Kindness were incubating egg(s), intruders started entering the park and fighting with Justice. A young male intruder, still showing subadult plumage in his tail and head feathers, diligently fought with Justice.

After several different battles, Justice would leave the area for a period of time before returning. The fighting went on for weeks. Kindness was left incubating the eggs alone after the first fight, which eventually resulted in their loss. During this time, the young male with the caramel coloring started showing a great deal of interest in Kindness. Eventually, the two eagles started to bond. The young male started being referred to as Jackson. While Justice made one more gallant return to the nest area, Jackson again met him and immediately chased him away. This was the last Justice was seen.

Changing of the Guard

Obviously, the community was very saddened in not only losing the egg(s) but in losing Justice as well. What we witnessed right away was Kindness really taking to Jackson and allowing him to sit with her in her favorite trees. The pair were also spotted flying together.

Nest cams were installed in the Bruce Yee nest, and Kindness visited the nest frequently, however, Jackson did not seem interested. The pair would often sleep in the park but away from the nest. Call it instinct or call it wanting a nest of your own, but Jackson was determined to build a nest elsewhere. During the fall as the pair continued to bond, they were spotted trying to build a nest in a pine tree away from the park. The tree was not protected from the elements and their pile of sticks all blew out of the tree on a windy evening. At the same time, they were enjoying a small, wooded area near city hall. AEF volunteers witnessed Jackson flying with a stick towards city hall and into the wooded area. Upon further inspection, the volunteers identified the tree where the sticks were landing. It did not take long until both Jackson and Kindness were spotted flying sticks into this specific tree. Within weeks that small pile of sticks started to take on the shape of a nest. It was amazing watching a nest go up so fast and be big enough to house eaglets.

Jackson & Kindness have continued a fortify a strong bond. Jackson is a fierce defender of the nest area and of Kindness. They continue to build the nest wider and higher, and they have claimed this new territory as their own.

The following video was created by Tammy Mellert and is a tribute to the former mate, Justice.